This Riot Recommendation collecting your favorite historical thrillers is sponsored by David Baldacci’s One Good Deed. 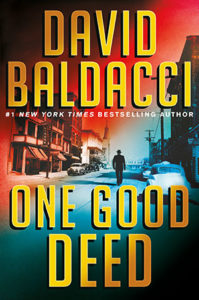 It’s 1949. When war veteran Aloysius Archer is released from Carderock Prison, he’s sent to Poca City on parole with a short list of do’s and a much longer list of don’ts. But the small town quickly proves more complicated and dangerous than Archer’s years serving in the war or his time in jail. When a murder takes place right under Archer’s nose, police suspicions rise against the ex-convict, and Archer realizes that the crime could send him right back to prison . . . if he doesn’t use every skill in his arsenal to track down the real killer.

We love when two favorite genres overlap, and we are all in for thrills in history! That’s why we’re sharing your favorite historical thrillers! We’re all strapped in and ready for the suspense and the intrigue. Ready? Here we go!

The Hunger by Alma Katsu

The Alienist by Caleb Carr

Murder on the Orient Express by Agatha Christie

The Name of the Rose by Umberto Eco

City of Thieves by David Benioff

A Study in Scarlet Women by Sherry Thomas

The Historian by Elizabeth Kostova

An Extraordinary Union by Tess Gerritsen

A Gentleman in Moscow by Amor Towles

The Confessions of Frannie Langton by Sara Collins