One thing I’ve taken away from the Game of Thrones phenomena is that there’s something to be said for a book that features a good battle royale between heirs for the crown. Below you’ll find nine books with unique takes on the idea of heirs competing for the throne, while also starring stellar female leads. I can’t promise they’ll all be made into HBO series that become your Sunday night tradition (a girl can dream), but you may just discover a new favorite book. 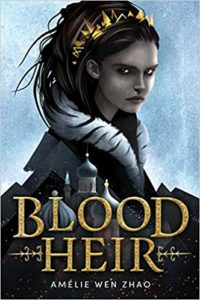 Crown Princess of the Cyrilian Empire, Anastacya Mikhailov, hides within the palace walls and carries a dark secret: she is an Affinite, cursed with a dangerous gift that allows her to control an aspect of the world around her. Her Affinity: blood. Anastacya’s secluded world crumples on the night she gets framed for her father’s murder. Escaping the palace, Ana sets off to find her father’s killer, enlisting the help of the most sly crime lord, Ramson Quicktongue, along the way.

In a Goodreads review from the author, Amélie Zhao shares the Dear Reader letter included in ARCs of her novel. I encourage everyone to read the letter in its entirety, but have included a snippet here. Zhao writes, “I gave magic to my girls who were told they were monsters. I gave my children of color the ability to fight oppression. Because in a world where there is so little I can control, I want to put hope and power in their hands for once—and in a world where those deemed ‘different’ are often cast out and made to be monsters, I want them to win. Thank you for reading.” 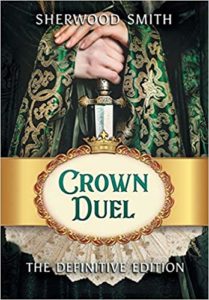 Now, this book holds a place of honor on my bookshelf, set snugly between a handful of other volumes I’ve designated as all time favorites. The book’s spine remains lovingly patched together with Scotch tape, a tribute to many rereads.

The story begins with the Countess Meliara, an Alanna-esque, headstrong girl, promising her dying father that she and her brother will protect their people from a tyrant king. Originally published in two parts, and later combined, I recommend reading the combined set. The first half grows nail-bitingly suspenseful as Meliara finds herself on the run from lords hot on her trail. Part two takes an enthralling turn as Meliara arrives at court, becoming enmeshed in political intrigue, a secret language of fans, and exchanging letters with a mysterious pen-pal. Any You’ve Got Mail fans out there? 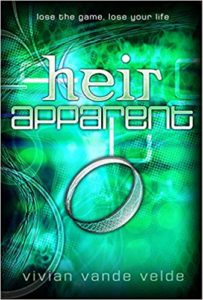 In a futuristic society, 14-year-old Giannine gets stuck in the virtual reality game Heir Apparent. The name of the game is to stay alive and get the crown. In VR, Giannine wakes up as a shepherd girl just learning she’s a secret heir to a vacant throne with three half-siblings to compete against. In true Groundhog Day fashion, every time she dies, Giannine wakes up at the beginning again. Outside her headset though, protesters break into the arcade and damage equipment, locking Giannine in the game until she wins. With a resourceful heroine and delightfully surprising ending, it’s no wonder Tamora Pierce gave this one 4 out of 5 stars on Goodreads! 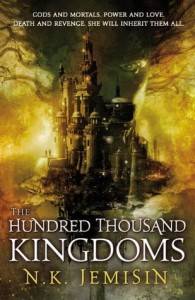 While I sometimes feel like I live in the land of a hundred thousand pancakes, Yeine Dar lives in the much more exciting land of the Hundred Thousand Kingdoms. Following the mysterious death of her mother, Yeine responds to a summons from the crown. Leaving her northern homeland, she journeys to the city of Sky. To her surprise, Yeine is declared one of three heirs to the king, along with two of her cousins.

Support from previously enslaved gods gives Yeine an edge against her political rivals as they compete for the crown. With exceptional world-building and explorations of race, class, and gender issues, Jemisin’s series makes for a thrilling read. Also, Tamora Pierce’s glowing Goodreads rating: 5 out of 5! 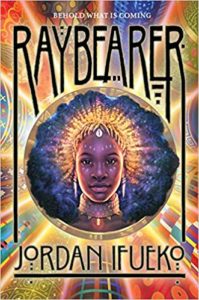 As a child, Tarisai grew up in isolation craving the connection of a family, much like Kaya from Where the Crawdads Sing. Raised by a mysterious and often absent mother, known only as The Lady, Tarisai follows her commands without question (definitely giving me a bit of a Mother Gothel and Rapunzel vibe here).

On The Lady’s orders, Tarisai travels to the capital of the global empire Aristar to compete with other children for the honor of selection into the Crown Prince’s Council. If chosen, Tarisai would get inducted through the deep bond of the Ray, finally achieving the sense of belonging she has yearned for all of her life. The Lady has other plans for Tarisai though, magically compelling her to murder the prince. Where will Tarisai choose to place her loyalties? Stay tuned for this enticing debut novel by Jordan Ifueko, with an expected release date of April 4, 2020. 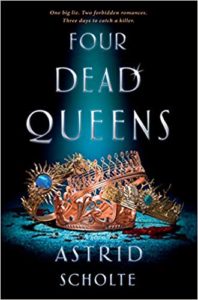 Four queens to rule them all in Quadara, that is until the day 17-year-old thief Keralie decides to steal a package from Varin, an honest citizen from Eonia. When Varin attempts to take back what Keralie stole, the two get thrust into the center of a plot that leaves all four queens dead. Now on the run, the pair team up in a nice True Detective style partnership to uncover the killer of their nation’s monarchs. Romance, secrets, and conspiracy theories abound within this edge-of-your-seat fantasy thriller. 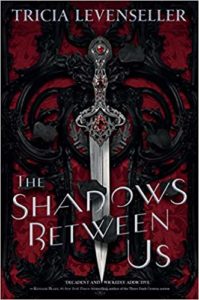 The Shadows Between Us by Tricia Levenseller

Released this past February, this new book by Tricia Levenseller intertwines the theme of fighting for a crown with a deliciously dark romance. Alessandra lives in a world ruled by the Shadow King—sounding a bit like if the Darkling won the throne in Leigh Bardugo’s Shadow and Bone trilogy. Ambitious Alessandra plots to take over the Shadow King’s kingdom. She’ll start by making him fall in love with her, then move on to marriage, and finally, when she has him within her grasp, she’ll kill him herself. Alessandra’s plan takes a turn however, when she discovers she’s not the only one out to get the Shadow King; she needs to keep him alive just long enough to marry him, right?

Levenseller reviews her book on Goodreads, stating, “I pitch this as my Slytherin romance. My characters have unapologetically questionable morals. Don’t expect them to change. It’s who they are. And this book is more romance heavy rather than action heavy, like the rest of my books. There’s nothing more disappointing than having unfulfilled expectations where an anticipated read is concerned, so I hope this aids in helping readers decide if this is the kind of book for them!” 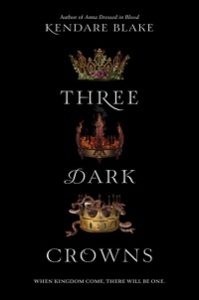 The island of Fennbirn selects its queen from a set of triplets born every generation. The winner of the crown: the last triplet left standing after a Hunger Games–style battle royale. Each of the three sisters has an elemental magical gift to use to her advantage: Mirabella, with her fiery and stormy powers, Katharine, an ingester of poisons (does this count Iocane Powder?), and Arsinoe, at one with the land and animals. Each sister balances first loves with developing their powers, but now that they’ve turned 16, the battle has begun. 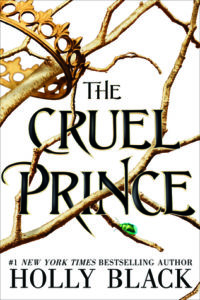 If you’re a sucker for Faerie court intrigues like me, I’d suggest giving this series a whirl. After her parents are murdered, 7-year-old Jude and her two sisters are whisked away to live in the High Court of Faerie. Now, ten years later, Jude has grown determined to win her place in the King’s council. However, she must overcome faerie prejudice, most of all from the youngest and most cruel Prince Cardan. Layered with deception and betrayal, this story finds Jude on a quest not just to belong, but to save all of Faerie.