Okay, last one, I promise.

Four people live in my house: myself (41, F), my husband (42, M), my son (10, M until/unless I am otherwise informed), and my daughter (7, F/same caveat as son-person). We are all comic fans. I’ll admit to having steered the spawn in that direction, though they’re old enough to make their own choices now and have continued down the path of this particular geekdom on their own recognizance. We all have different favorite comicverses but do come together for various incarnations of the Batverse, which means we all have favorite Robin stories. Most of those are Dick Grayson tales and, since he was the first Robin, and founder of the Legacy, we’ll stick with stories in which he is either Robin or Nightwing.

I got it down to a two way tie but, ultimately, couldn’t decide so I’m giving you both.

One: Grayson by Tom King, Tim Seely, and Mikel Janen

Dick, at Bruce’s request, fakes his death and goes undercover in the super secret Spyral organization. Along with Helena Bertinelli (Huntress), he searches the world for pieces of Paragon, a dead god whose corpse is a weapon of mass destruction.

This series was a fun little solo jaunt for Dick, an opportunity for him to flaunt his detective skills away from the Batfam. The distance also gives King and Seely some room to play with the dynamic between Dick and Helena, which is always an enjoyable experiment and between Dick and Midnighter (who is a sadly underutilized character IMO. He is the man in black featured below, BTW, not Batman). Also, I’m not going to lie, the Grayson derrière appreciation is strong in this one: not only do his butt cheeks get named, but we get this classic panel which I plan to someday frame and hang on my wall (and no, I have not shared this one with the children, but did you actually think I was going to let this go by without a mention of Gotham’s ass?):

The Stack Newsletter
Sign up to The Stack to receive Book Riot Comic’s best posts, picked for you. 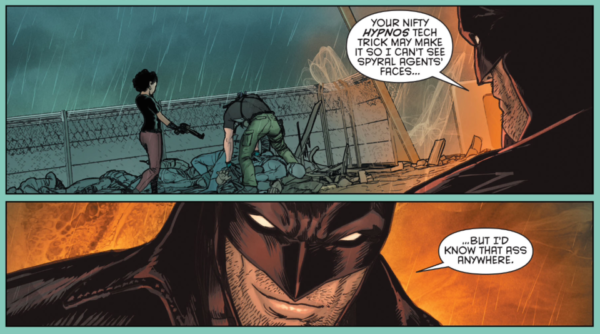 If you didn’t watch the most recent season of Young Justice, what’s wrong with you (she says as someone who came very late to this show with the vehemence of any recent convert)? After barely surviving Granny Goodness’s anti-life equation, a critically ill Dick/Nightwing insists on joining the team to save Halo. Taken out of the physical battle early, he tries to hack a Javelin with little success until he starts to hallucinate both himself as a young Robin and his best friend, Wally West, as a young Kid Flash. Wally, who died a hero in S2—or Dick’s version of Wally—helps him solve the puzzle and save  the team.

We don’t see heroes vulnerable all that often, especially members of the Bat family, which makes this episode not only a lovely tribute to Wally’s legacy but also to Dick’s as Wally’s friend and superhero brother. I may have cried a little. Maybe.

The Teen Titans animated series ran on Cartoon Network from 2003–2006. It was really pretty good. Targeted for older teens and adults, there were some pretty dark storylines and not every episode and/or arc wrapped up in a pretty bow, but there were also some fantastic comedic entries into the franchise, the best parts of “The Quest” being some of the funniest.

After being defeated by a rival, a very serious Dick goes on (you guessed it) a quest to find The True Master, purported to be the world’s greatest fight instructor.

While he’s gone, the rest of the Titans go through his stuff and, finding his extra costumes unprotected, don the tights and proceed to put on quite the roast for one another. Starfire is by far the funniest, crafting the new verb “Robining” and playing with Dick’s Starfire marionette (he’s a little stalkery in this incarnation, if harmless). And then there’s Silky, Starfire’s pet space-worm, chowing down on pizza while wearing the mask and cape. Perfection.

The hubs felt it was important to remind everyone that season one of Young Justice was made all the better for Dick’s use of real but bizarre words in perfect context. We still tell one another to “Stay whelmed.”

(yes, I know this GIF is Nightwing, I couldn’t find a Robin one)

For those of you who haven’t partaken of Teen Titans, Go!, it can be viewed as 100% absurdist nonsense, which is why it’s wonderful (though I do wish the episodes were 30 minutes rather than two 15 minute segments). TTG is a fun, silly introduction to Starfire, Raven, Robin, Cyborg, and Beast Boy pitched for the kiddos; on another level, however, should you choose to accept it, TTG is a meta satire of the original Teen Titans animated series specifically and the superhero genre generally. Also, there are fart jokes and musical numbers. I am an unabashed fan as is the rest of the family.

Son-person chose the series’ five day “Island Adventures” event as his favorite Robin story. The team, with Robin leading, are shipwrecked on a deserted island, must use said island’s resources to survive. Over the five days they are stranded, the Titans: hold a competition while attempting to evade an alien bounty hunter, go looking for food and find dinosaurs, allow Robin to grant their strangest desires, and find out that they may not have been as shipwrecked as they think. It’s all very cooky and weird and we all laughed a lot.

Daughter-person’s favorite thing about this episode is when the actual robin Robin shows up (she called the birds robin Robins for years and we still do it as a joke) but this is another one of those Teen Titans, Go! episodes that can be viewed on several different levels depending on your age bracket and how much digging you’ve done into the Batverse.

When the other Titans are too lazy to fight crime, Robin calls on different versions of himself for assistance (original Robin, Carrie Kelly, Tim Drake, and TTG). Upon their return from a mission, the other Titans start calling favorite Robins; none of them chooses their own version. Their argument devolves into a fight among the Robins about which of them is best because, as they’ve all been trained by Batman, they’re all supposed to be superior and can’t stand the idea of not being the best. Dick ultimately kicks the rest of the Robins out and refuses to call them back when the Titans are captured by Brother Blood. Thank goodness Super Robin (AKA robin Robin) comes in for the rescue and everyone, including Dick, agrees he is the best Robin.

Is it exactly as absurd as it sounds and it is glorious.

Have a favorite Dick Grayson story? Let us know over on Twitter (@bookriot) or on Facebook (Book Riot). And happy 80th, Dick! Here’s to 80 more.