Without a secret identity, is a superhero really a superhero? Obviously, the answer is yes. Nowadays there are lots of heroes who don’t bother hiding their civilian identities. But traditionally, superheroes have been zealously protective of their real names and faces.

While it makes sense that these heroes would want to keep their real names out of the papers (in theory, anyway: in practice, their stated purpose of protecting their loved ones never seems to pan out), the lengths they were willing to go to protect themselves are astounding and frankly a little creepy. So if you’re looking for some, uh, “creative” ways to hide your secret true identity from the world, here are a few ideas.

When Kathy (not yet Kate) Kane debuted as Batwoman in Detective Comics #233, Batman and Robin were less than welcoming. Not only was Batwoman faster and more effective than them — she even saved Batman’s life — she also threatened to expose their secret identities if they exposed hers.

Sick of being upstaged by a woman — uh, I mean, for her own safety, the Dynamic Duo plot Batwoman’s downfall. They deduce her true name and, having taken countermeasures against her threat to spill their secret identities (she set up an x-ray camera to photograph their faces if they infiltrated her Batwoman-cave), convince her to hang up the cape. This didn’t exactly stick, but it’s the principle of the thing.

Get a New Identity

In Doctor Strange #181, in the midst of an argument with Nightmare, the good doctor blabbed his secret identity to the world like an amateur. Worse, Strange’s mission — to save Eternity, the personification of the universe itself, from Nightmare’s clutches — was basically pointless: Eternity could have escaped at any time and just didn’t feel like it until after Strange had risked his neck to come save him.

But lest you think Eternity is a complete jerk, he does reward Strange for his good deed by rejiggering the universe/himself to give Doctor Strange a new name: Stephen Sanders. As far as the world is concerned, this has always been his civilian name, thus allowing Doctor Strange to regain his secret identity. Note: This strategy only works if you are on speaking terms with the anthropomorphic embodiment of the timeless, endless universe.

Get Lucky and Troll Your Boss

In Action Comics #297, Perry White, Clark Kent’s boss, gets amnesia, as you do. He falls under the influence of some shady characters who hire Perry to figure out Superman’s true identity. Perry, still in possession of his crackerjack journalistic abilities, succeeds.

But just as he confronts Clark with this knowledge, Perry trips over a nearby statue of Julius Caesar. Clark, knowing that Perry’s favorite expression is “great Caesar’s ghost,” uses his powers of heat vision, super-breath, and super-ventriloquism to make the statue seem alive. This jolts Perry’s memory and/or terrifies him back to normal, at which point he conveniently forgets that he ever knew Superman’s identity. Honestly, this story just proves that Perry could figure out Supes’s real name any time he wants. But he doesn’t, because he’s nice like that.

Daredevil is objectively the worst at keeping his identity secret and also at friendship. In Daredevil #25, not three years into his heroic career, Spider-Man busted him and accidentally leaked the secret to DD’s friends. So what does Matt Murdock do? Pretend to be his own twin brother, Mike, who was of course the real Daredevil all along.

When the Mike charade got old, Matt killed him off, subjecting his friends to the trauma of his “death.” A few years later, a supervillain named Starr Saxon discovered Matt was Daredevil and attempted to blackmail him. So Matt faked his own death via plane crash, traumatizing his friends all over again. My hero.

Throw Caution to the Wind 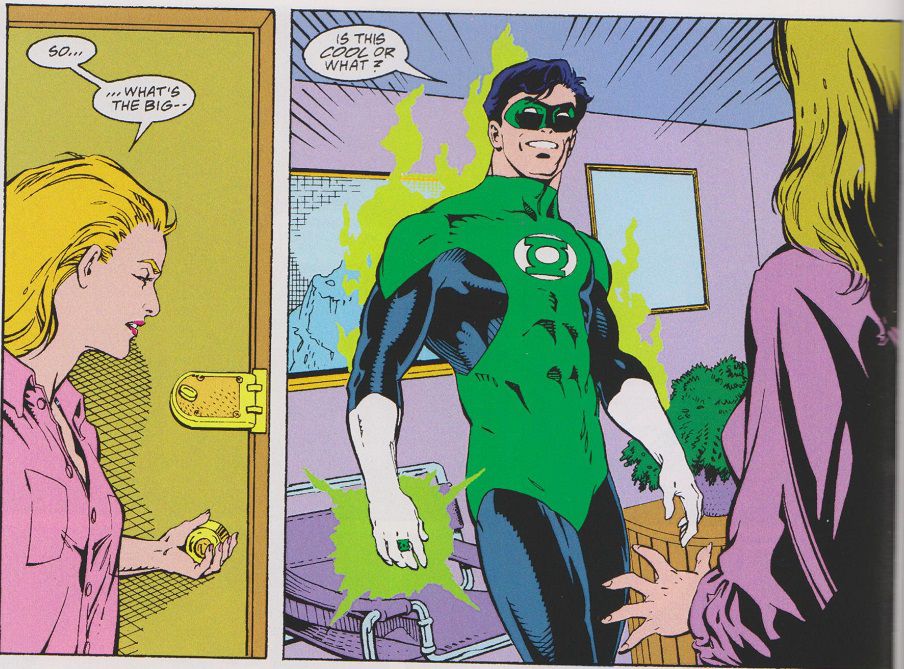 At this point, you might be shocked to know that there are a few heroes who did not take the secret identity thing so seriously. Take Kyle Rayner, for instance. He was a far different Green Lantern than his predecessor, Hal Jordan. For one thing, Kyle never went on a murderous rampage. For another, he didn’t twist himself into a big green pretzel to keep his identity a secret from his girlfriend.

As soon as he got his Green Lantern ring, Kyle ran straight to his ex’s apartment to share the good news. Alex DeWitt briefly became Kyle’s cheerleader/lifestyle coach, encouraging him to be a responsible hero instead of the schlub he’d always been. Then their relationship tragically turned…frosty. Thus did Green Lantern help usher in a new era in the way we discuss women in comics and in the way superheroes navigate the world of secret — and not-so-secret — identities.