Hey there. It’s me, Joe Bunting. Maybe you’ve seen my name around here. Maybe you haven’t (which is fine). I thought I’d take a second to re-introduce myself and share something I’ve been thinking a lot about in my writing lately. 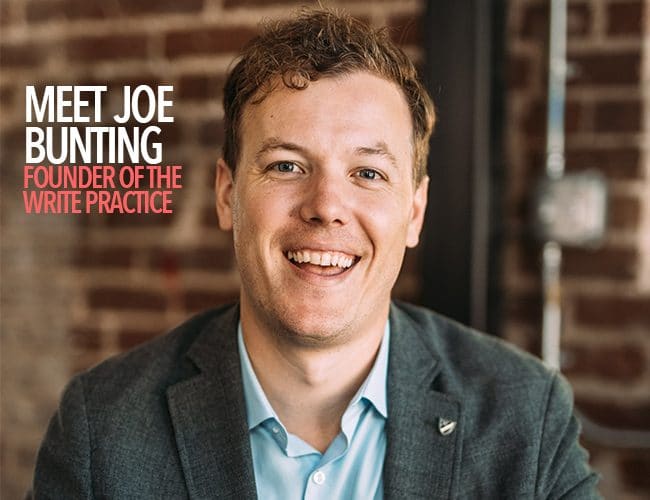 Since I was 14 years old I’ve been chasing awe. ⁣⁣⁣⁣

It started when I realized as a teenager that there was this thing that happened to me sometimes. I had always been kind of a sensitive kid, but I realized that every once in a while I would just start crying.

Sometimes it would happen while watching a movie or listening to music, sometimes at the church my family and I went to, often while reading great books.

I wasn’t sad. I wasn’t in pain. It was something else, and as embarrassing as it was to be a teenage boy who was crying, it also felt good. I wanted to experience more of that thing.

It took a long time to realize that the feeling I was experiencing was awe.

What Is Awe Really?

Awe is a word we throw around sometimes (an awesome word, you might say), but what is it really?

When I think of awe, I think about this line from Cormac McCarthy’s Blood Meridian, which I’ll share below. You don’t have to read the whole thing, or any of it, really. But I think it captures the feeling of awe as well as anything I can say:

A legion of horribles, hundreds in number, half naked or clad in costumes attic or biblical or wardrobed out of a fevered dream with the skins of animals and silk finery and pieces of uniform still tracked with the blood of prior owners, coats of slain dragoons, frogged and braided cavalry jackets, one in a stovepipe hat and one with an umbrella and one in white stockings and a bloodstained weddingveil and some in headgear of cranefeathers or rawhide helmets that bore the horns of bull or buffalo and one in a pigeontailed coat worn backwards and otherwise naked and one in the armor of a Spanish conquistador, the breastplate and pauldrons deeply dented with old blows of mace or sabre done in another country by men whose very bones were dust and many with their braids spliced up with the hair of other beasts until they trailed upon the ground and their horses’ ears and tails worked with bits of brightly colored cloth and one whose horse’s whole head was painted crimson red and all the horsemen’s faces gaudy and grotesque with daubings like a company of mounted clowns, death hilarious, all howling in a barbarous tongue and riding down upon them like a horde from a hell more horrible yet than the brimstone land of christian reckoning, screeching and yammering and clothed in smoke like those vaporous beings in regions beyond right knowing where the eye wanders and the lip jerks and drools.

Oh my god, said the sergeant.

Isn’t that amazing?! That huge paragraph? That’s one sentence with no fewer than three words that McCarthy invented.

Blood Meridian takes place in 1850 on the border of Mexico and the U.S., and this amazingly beautiful sentence comes when this band of comanches is bearing down on a troop of Army irregulars. The irregulars are outnumbered and about to be slaughtered.

“Oh my god,” says the sergeant as he and his men are about to be annihilated.

That? That exclamation of dread mixed with the beauty of McCarthy’s writing? That is awe.

Awe is synonymous with both wonder and dread.

To me awe is this emotional and spiritual realization that life is both wonderful and dreadful and overwhelmingly good.⁣⁣

My Journey To Find Awe

I decided to become a writer because of this feeling.

It started because I thought that if I could read and write books as my job, I could just sit in that feeling, that awe, all day long. I was 17 and had no idea what being a writer actually meant.

I didn’t start with books, though. Instead, I began with songs. I remember this one moment when I was performing a song I had written at one of my first shows. In the middle of the show, I felt it. It was like a presence, like some outside thing that had come into the room. It was awe.

All of a sudden I was crying, crying in the middle of my song. But I wasn’t the only one. Other people were crying too, a few people weeping even. I looked around the room through blurry eyes to  see grown men with tears running down their faces. It was amazing.

This I thought was something I could give my life to.

Eventually I switched from songwriting to prose writing, and I began to learn my chosen craft. In high school I took writing classes, in college I majored in creative writing, I got a job at a local magazine after college, I blogged, I wrote books, I started teaching, I created The Write Practice, all to learn the craft of writing so I could convey this feeling.

At some level, all my focus on the craft has worked. People started paying attention. My audience grew, by small amounts at first, and then by huge jumps. This year, The Write Practice is going to reach 5 million people. ⁣⁣My book, 14 Prompts, has been read by over 100,000 people. I’ve accomplished so many of my dreams.
⁣⁣
But then over the last few months it began to hit me. I had spent so much time focusing on the craft that I’d forgotten what the craft was for. ⁣⁣
⁣⁣
It wasn’t supposed to be about getting the biggest audience possible. It was to help people experience awe. And that feeling that I had worked so hard to chase, the awe? I realized I was growing more and more distant from it. The work of chasing awe had only brought me farther away from it.

Most people try to relieve this tension, one way or another. They focus on writing books that sell and then get frustrated when they feel like a sellout. Or they ignore the marketplace, focusing just on their art, and then are disappointed when they don’t sell any copies of their books.

For me, I had focused so much on trying to impress people with the craft, to make people think I was a good writer who knew what he was talking about so they would listen to me, that I forgot what the craft was for. It wasn’t supposed to be about impressing people. It was supposed to be about passing along this feeling, this awe that I had dedicated my life to.

So here we are. I’m done with choosing  the craft over my message, not because the craft isn’t important (it is) but because it’s only as good as the thing it’s conveying. ⁣⁣

And so I’m going to be doing some new things. The first new thing is a podcast. It’s called Character Test. This week, the first three episodes officially went live. In the podcast, I interview Shawn Coyne, the editor and creator of Story Grid, and also Navy SEAL and NY Times bestselling author Jason Redman.

I’d be honored if you’d check it out. Here’s the link to listen to the Character Test show on your preferred podcast player. You can also listen to the first episode below, or you can search for Joe Bunting on iTunes, Stitcher, or Spotify.

What Are You Chasing?

I always come back to this quote from Robert McKee, the famous instructor of the Story workshops:

How do you want to touch the audience? To me, this is where craft meets core message.

It’s not enough for me to just write about awe. I’ve tried it. It doesn’t work. Without craft, it becomes narcissistic and kind of boring. But craft without core message is hollow and eventually forgettable.

So how about you? What is your core message? What feeling are you trying to share with an audience, so they can be touched by it just as you have been?

Let me know in the comments. I hope you enjoy the podcast! Thanks for reading and thanks for listening.