So you’ve finished your book. Have you been looking at publishing classes to figure out how to bring your story into the world? I did years ago. 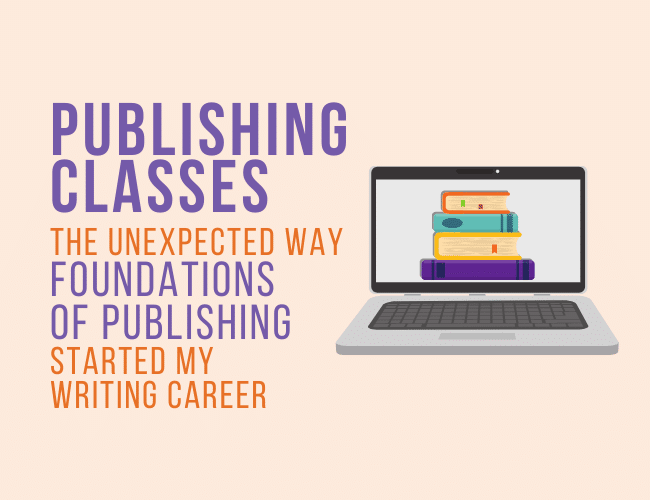 MLK’s “I Have a Dream” speech was turning fifty, I had just switched from a very toxic day job to a much more peaceful one, and I had become determined to take my writing career a little more seriously. I researched publishing classes on how to publish, and landed upon the Foundations of Publishing program (then called Write to Publish).

It’s worth mentioning that I went into this program with the utmost confidence.

I had self-published a book the year before, and although it only sold a meager eleven copies, I was convinced that the only issue with it was that I didn’t know how to market, and that if I had just learned the “trick” to attracting an agent or publisher, I would surely become an instant success.

And so I signed up, prepared myself, and thought for certain that I was only weeks away from becoming a best-selling writer.

Then came the first challenge.

While writing wasn’t new to me, I had no idea everything I actually needed to know if I was going to publish successfully. There were a lot of lessons left for me to learn.

I Had a Lot Left to Learn From This Publishing Class

If you ever decide to take a publishing class, particularly Foundations of Publishing, you’ll see that, right away, Joe Bunting, the leader and creator of The Write Practice, calls you to take on a simple task: write a short story.

The first time I crossed this, I felt resistant. To put it simply, I felt myself “above” short stories.

Why write short stories when I can write novels?

Why should I try to lower myself to a measly short story when I’ve already finished a 150K word book?

But since I wasn’t about to abandon a program on the first assignment, I decided to, begrudgingly, write this short story. Immediately I learned my first lesson: short stories are hard.

You Can Learn a Lot by Writing a Short Story

With a length limit in place, every word had to count. I was used to rambling for pages on a character’s tragic backstory involving a candle and a chair, or the color and decor of a very specific teahouse.

I struggled hard, threw together a semi-passable story, and posted it for review in the forum. The feedback I received was politely positive, but I could tell there was nothing about my story that stood out. I fumbled around with the piece, trying to pinpoint why it wasn’t good, and met my next big obstacle.

I didn’t know how to fix it.

“ Before you decide to publish a story, it’s important to understand how to fix it. Tweet thisTweet
Writing is One Thing, Revising is Another

I went through the rest of the program feeling rather deflated, following the steps to publish on Amazon as closely as I could, but when it came time to hit that button, I stopped.

I couldn’t allow myself to publish this story that I didn’t even like. It felt somehow like compromising my integrity as an author.

And so it was then that Foundations of Publishing taught me the most important lesson I’ve learned to date: when to admit I wasn’t ready to publish my story (yet).

This may sound like a step back, and for a while it was. I stepped away from writing and The Write Practice, for three years.

During this time, I went through exhausting fertility treatments to have my first child, which was then followed nine months later by the surprise pregnancy of my second child. Then, in 2016, when I was tired and sleep deprived during my second maternity leave, I received an email from The Write Practice.

They were having entry calls for the Spring Writing Contest. I was very hesitant to enter a story, but also this email sat with me.

Why Writing Returned to My Life

As I said, the email felt intimidating to me. After all, I hadn’t written in years. In fact, I’d started to convince myself that I didn’t want to be a writer after all. But something about the contest called to me, and I made a decision to try and learn how to write.

Up until this point, I’d very much been a member of the “writing can’t be taught” camp. I believed that you were either good at writing or you weren’t.

But now that I’ve admitted maybe I wasn’t quite ready to give up on this dream, I decided to take a chance. Why not?

“ Publishing classes like The Write Practice’s Foundation of Publishing will teach you a lot about publishing, including strategies on how to revise your story and ways to then share it with the world. Tweet thisTweet

I’m too tired to do anything but sit around and wait for my newborn to wake up to be fed again anyway. I’ll give these “writing books” a try. I decided to go with one by my favorite author Stephen King and his classic book On Writing. I figured if the book has nothing to offer, then at least I should enjoy it.

That book changed my life.

For the first time, I realized writing can truly be taught and learned. I read through the book, took away a number of tips and tools, and decided to enter the contest. But, weary of trying to write a new story, I dug up the only proper short story I’d never written: the same one I wrote for Foundations of Publishing three years prior.

I can admit this now, that technically this was cheating. We weren’t supposed to use a story we’d written before.

But it was three years old, poorly crafted, and never published. There was a lot of room for improvement, and it might not even be the same story it started out as after I finished working on it.

I dusted it off, read it through, and saw that it had good bones but terrible everything else. This time though, I knew how to fix it.

P.S. If you haven’t read the Six Elements of Plot yet on The Write Practice blog, it might be worth checking out!

Turning Something That is Rough Into Publishable

I modified the story to better fit the contest theme, then I implemented a number of tools learned from On Writing. The biggest of which being “everything must be story”. I polished it and submitted it, with a modicum of hope that it’s at least not embarrassing.

This story is Wingtips, for those who are interested in reading it.

It went on to place sixth among the six winners of the contest, and became the first of my many stories published on Short Fiction Break.

In the four years since, I’ve read dozens of books on writing, shortlisted in a few more contests, became a staff author for Short Fiction Break, became a regular blogger for The Write Practice, joined One Year to Publish, sold a story to an anthology, and written two books, one of which, Headspace, is due to be published this summer.

Want to read my latest story? My novel Headspace will be published in July 2021, but you can read it now for free when you join my launch team! Send an email to admin@thewritepractice.com to let me know you’re in. I can’t wait to see what you think!

In short, I embraced the reality that you can learn to write.

And because of this, I started to implement all the additional lessons I learned in Foundations of Publishing, like why it’s important to share my stories, and how to publish them.

Humbling Yourself Before Publishing

No matter the progress I’ve made, I still look back to that very first time I joined The Write Practice, and the difficult lesson I learned through the publishing class Foundations of Publishing.

The fact is, I don’t think I would’ve ever humbled myself to truly learn to improve my craft if the program hadn’t shown me my limitations. Even though I almost gave up on writing afterwards, recognizing my own shortcomings pushed me to take an honest look at myself, go back to basics, and become a more competent writer than I’d ever been.

All that to say, a new session of Foundations of Publishing is kicking off soon. If you could invest in publishing classes that will help you, this might be a good choice for you!

If you’ve joined the program, I wish you well! If you haven’t, I highly recommend it.

Whether it gives you the boost you need to finally get published, or a much-needed reality check like it provided me, it’s an opportunity not to be missed. Sometimes you find what you need most in unexpected places.

Have you ever felt afraid to publish or share your stories? Do you think it was because they weren’t ready yet? Let us know in the comments.

It might feel strange to write a short story if you’ve already completed a book, but writing a really great short story can actually help writers improve their craft at any stage of their writing career.

Which brings me to today’s practice challenge: come up with a short story idea and write a premise for it. Spend fifteen minutes doing this, and then set a word count for your short story.

Share that idea in the comments section and comment on at least two other posts (don’t be afraid to ask them to critique your premise, too!). When you’re ready, go write it. Maybe this will be the next short story you enter into a contest, or use for your own enrollment in Foundations of Publishing!