Honoring the finest works of translated fiction from around the world, the Booker International Prize has announced its 2021 winner, At Night All Blood Is Black by David Diop, translated from French by Anna Moschovakis. BBC’s Colleen Harris hosted the virtual ceremony from Coventry Cathedral as part of Coventry’s UK City of Culture celebrations. The ceremony included remarks from the judges and the shortlisted authors and translators and readings from the six novels, presented in partnership with the Royal Shakespeare Company.

We’re delighted to announce that the winner of the #2021InternationalBooker is ‘At Night All Blood is Black’ by @DDiop_ecrivain, translated from French by Anna Moschovakis and published by @PushkinPress: https://t.co/UUKOh3RdWO#TranslatedFiction #FinestFiction pic.twitter.com/9hxo2p2O8a 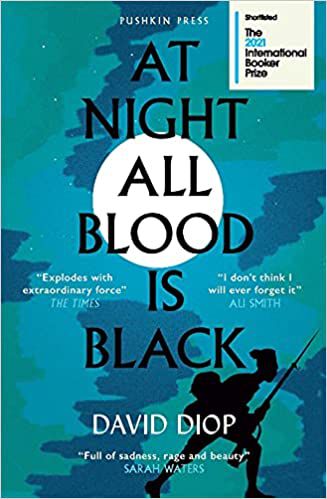 At Night All Blood is Black is a haunting and powerful novel that tells the widely unknown story of the Senegalese who fought for France on the Western Front during World War I. After his best friend is mortally wounded in combat, Alfa, the protagonist, is alone amidst the savagery of the trenches. The novel follows his descent into madness as he throws himself deeper into the terrors of war, to dizzying effect. At Night All Blood is Black is Diop’s second novel. It was shortlisted for ten major prizes in France and won the Prix Goncourt des Lycéens. Raised in Senegal, he now lives in France, where he is a professor of 18th century literature. He is the first French author to win the International Booker Prize. Anna Moschovakis is a poet, author, and translator of James Laughlin and Annie Ernaux, among others.

Chair of the judges, Lucy Hughes-Hallett writes, “This story of warfare and love and madness has a terrifying power. The protagonist is accused of sorcery, and there is something uncanny about the way the narrative works on the reader. We judges agreed that its incantatory prose and dark, brilliant vision had jangled our emotions and blown our minds. That it had cast a spell on us.”

The International Booker Prize is awarded every year to a single book translated into English and published in the UK and Ireland. It aims to encourage more publishing and reading of international fiction from all over the world and to promote and recognize the work of translators. The £50,000 prize is split between the winning author and translator. Each shortlisted author and translator will receive £1,000, bringing the total prize money to £62,000. This year the judges considered 125 books.

And if you’re looking for even more great recommendations for international literature, check out last year’s winner and this year’s complete longlist.