As Ben Franklin said, the only certainties in life are death and taxes. Of course, if you’re a superhero, you really only have to worry about taxes. Comic book deaths are more like a long vacation in a remote mountain cabin: it may be rough, and you may not be able to contact your loved ones, but you know you’ll go home eventually.

I’ve already covered instances where a character’s family was magically erased with no explanation by creators in search of sales. This list is strictly about characters who were missing and presumed dead, only to dig their way out of their graves for another shot at life (some more literally then others). As their surviving family, who in most cases mourned them and moved on years ago, how do you deal with that? Let’s find out!

Kill Them Harder This Time 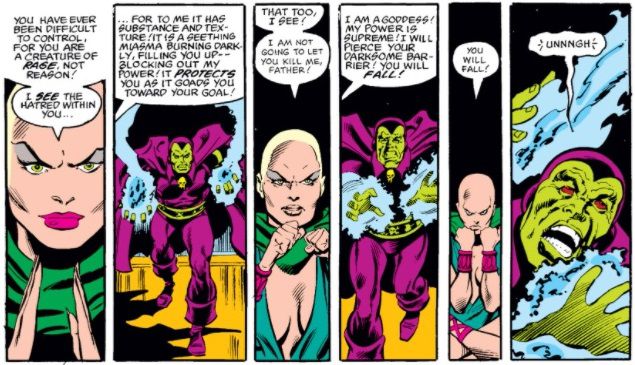 After a car accident, young Heather Douglas and her father, Arthur, each assumed the other had died. Instead, they were both rescued by different aliens who transformed them: Heather became Moondragon, a self-proclaimed “goddess of the mind,” and Arthur became Drax the Destroyer.

In Avengers #219-220, we see that father and daughter have reunited at long last. The circumstances, however, are less than auspicious: Moondragon has used her powers to take over a planet—for their own good, she claims. To maintain control, she mentally manipulates the entire populace, the Avengers, and her own father. When Drax breaks free of Moondragon’s mind control and tries to kill her, she strikes first, with fatal consequences.

Abandon Them (And Make Them Your Sidekick)

Superman’s status as the sole survivor of the planet Krypton has gotten increasingly shaky since his 1938 debut. One of the first blows to this image was the debut of his teenage cousin Kara Zor-El, alias Supergirl, in Action Comics #252.

At first, Supes was delighted to discover he had a cousin, even promising to “take care of you like a big brother.” Three panels (not pages—PANELS) later, he shunts her off to an orphanage with the vague promise that she, too, can be a superhero someday if she tries real hard. Unwilling to wait that long, Kara soon begins joining Superman on his various adventures. He still wouldn’t let her out of the orphanage, though.

She’s a mutant with inexplicable hex powers. He’s a synthezoid built from plastic and the brain patterns of a dead Avenger. Together, the Scarlet Witch and the Vision made an odd but happy couple—until he inevitably died. Even after he returned, Vision considered their marriage over.

Enter Wonder Man. He, too, was dead (for the second time!) until Scarlet Witch resurrected him with the power of her repressed love for him in Avengers #11. They began dating immediately, much to the Vision’s unhappiness. Making things more fun is the fact that Wonder Man was the dead Avenger whose brain patterns formed the model for the Vision’s own mind, and Wondy considered him and Vizh to be brothers. Talk about off-the-charts awkward!

The death of Jason Todd, Batman’s second Robin and adopted son, was controversial from the start. Not only was it terribly violent (the Joker beat him with a crowbar and then blew up the building), it was the result of a now-infamous publicity stunt, where readers got to call a special number and decide his fate. Still, Jason managed to stay dead from 1988 to 2005, at which point some retcon shenanigans had him busting out of his own coffin.

Upset that Batman hadn’t avenged his death, Jason took on the name of the Red Hood (formerly one of the Joker’s aliases) and went to murder the Joker himself. Obviously, DC Batman could not allow that to happen, leading to years of animosity. Jason has mellowed a bit since then and is currently closer to the side of the angels than not.

Get Used to It 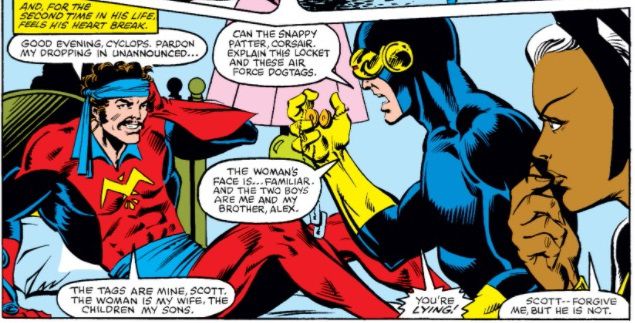 Cyclops may be Marvel’s reigning champion of finding out his family is secretly alive. First, he was reunited with his brother Alex after they were separated as children. (Cyclops didn’t necessarily think his brother was dead, but he hadn’t seen him in years and had no idea what happened to him, so I’m counting it.)

Later, in Uncanny X-Men #154, he learned the space pirate Corsair was his not-dead dad. (That did not go down well.) Later still, in X-Men: Deadly Genesis, Cyclops learned that he had another brother, Gabriel. Professor X had erased Cyclops’s memories of Gabriel after his supposed death, only to be forced to reveal the truth when an extremely cranky Gabriel returned. (That REALLY didn’t go down well.) And, of course, there are the times when his sometimes-wife, Jean Grey, dies and is resurrected. The fact that Cyclops still manages to be surprised by every reveal is a testament to…something.