Being a superhero is cool enough, but being a superhero and a god? How sweet is that? You get awesome powers, unbeatable weapons, and eternal life, all for the low, low price of never questioning the boss god, ever, for any reason.

Oh, did I forget to mention? Most hero-gods, while powerful compared to mere mortals, pale in comparison to their elder gods. These elders, usually a strict father figure, can either bless the hero-god’s activities or make their lives miserable in a variety of cruel and unusual ways. For instance:

Hercules is famed for his strength, not his brains. Turns out there’s a reason for that. After falling for a super obvious trap and causing trouble on Earth in Avengers #38, Herc’s dad Zeus was like “Fine, you like Earth so much? Stay there!”

Though a miserable misfit at first, Hercules soon made two important discoveries: suits, and that saving people is pretty neat. He joined the Avengers for a while, but only until he had to save Zeus and all of Olympus from destruction. This tiny favor redeemed him in his ol’ dad’s eyes, and Herc returned home.

X’Hal was not born a god. Originally, she was an ordinary woman from Tamaran, better known as the home world of Teen Titan Starfire. But after being kidnapped and suffering unspeakable torment, X’Hal became so powerful that, when she returned to Tamaran, she became the object of worship of an entire star system.

But, unsurprisingly, X’Hal’s brutal captivity left her with some anger issues. Instead of treating her worshippers kindly, she destroyed the heck out of several planets. Granted, she did this in response to one planet exiling her bloodthirsty son, but still. Imagine her at a parent/teacher conference.

Here’s another example of Zeus being terrible. In the “Challenge of the Gods” storyline, Wonder Woman was hanging out on Themyscira, minding her own business, when Zeus popped out of a clear blue sky and, uh, “offered” to sleep with her.

Wondy was scrupulously polite in telling him “ew, no thanks,” but Zeus took offense anyway. He threatened to kill her if she didn’t complete a series of deadly challenges set forth by the Greek pantheon. With her mother’s help, Wondy succeeded, but in the process, she was forced to supercharge the war god, Ares. You gotta do what you gotta do.

In JLA: Act of God, all of DC’s heroes are suddenly stripped of their powers. How did this happen? The book doesn’t care to answer that. What we do know is that the Greek gods make no appearance whatsoever, and the former Wonder Woman turns to Christianity to cope with her powerlessness.

This is stupid for several reasons, the most prominent being that the Christian god wasn’t any more helpful or responsive to the crisis than the Greek gods were. Why would she suddenly switch religions now? In any case, it’s clear that somebody somewhere had turned against her…but she should be used to that.

Wake Up Every Day Vowing to Be the Literal Worst 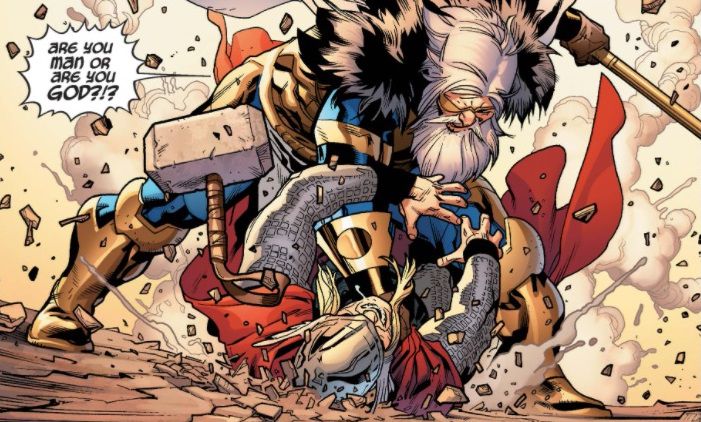 Thor’s dad Odin, dirtbag extraordinaire, knows only one way to relate to his offspring, and that is through cruelty. One of his biggest acts of jerkassery occurred before Thor’s first appearance. Odin not only banished Thor to Earth for a comparatively minor crime, he erased all of Thor’s memories and powers and made him believe he was a mortal medical student, Don Blake.

I can’t even begin to list all of the ways Odin has abused Thor over the years, from stripping him of his powers (as in Thor #145, as punishment for wanting his own life), beating him up personally (Thor #292, for trying to stop Odin from wrecking another pantheon’s city), throwing him in jail (Fear Itself, in a wildly misguided attempt to save Thor’s life), and re-banishing him (Thor #278, for suggesting that killing innocent people is bad). A lot of the time, Thor just takes it, convinced of his father’s unswerving fairness. I guess even a superhero-god isn’t immune to the psychological effects of an abusive parent.