Are you a superfan of the Harry Potter series? Is this your first time (or hundredth) writing a book, and you’re (still) mesmerized by JK Rowling’s writing process? 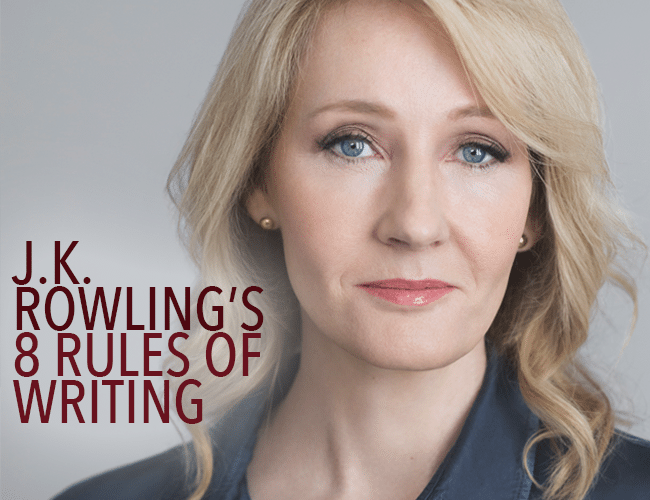 If you’re a writer, it’s likely that you a.) at least know the Harry Potter series and, b.) dream of a writing career that thrives like JK Rowling’s.

But to do this, you need to master the craft of writing.

And what better way to build your craft than learn from JK Rowling’s writing process?

We Could All Learn From JK Rowling’s Writing Process

If you’re anything like me, you probably have fantasized about a writing career like JK Rowling’s at one point or another, especially while working on the first draft for your first book.

Who wouldn’t love to create a teenage girl who shattered boundaries and stereotypes like Hermione Granger, or a complex shapeshifter that keeps readers guessing like Snape?

Don’t you want to write a moment in your book that is as exciting as receiving an acceptance letter to Hogwarts? I’ll admit it, I’m still holding out for mine. (Maybe the Weasley’s owl got lost in transit.)

But until then, I know there’s value in turning my spare moments into focused concentration on how to improve my books.

Whether you want to write short stories or 90,000 word novels, we can all grow our craft by taking some of JK Rowling’s writing tips.

By taking a page from JK Rowling’s writing process, maybe you can create a setting as masterful as the wizarding world, or as memorable as Rowling’s best-selling series in history.

You know who JK Rowling is. You know Harry Potter took the world by storm. You may even be aware that Rowling had trouble getting published. It’s true, there was a time when several people didn’t want to take a risk on Harry Potter (shocker: publishers do not know everything).

Ms. Joanne Rowling knows the publishing world and can speak from both sides of victory and defeat.

Today, from shorter children’s books like the first book in the series to longer, complicated plots like in Harry Potter and the Order of the Phoenix, few will argue that Rowling doesn’t know her way around a plot.

Even with scripts like Fantastic Beasts and Where to Find Them, Rowling understands how to catch our attention and keep it from page one to the end. Over the course of her writing career, she’s shared a lot of terrific writing wisdom to teach other writers how to do the same.

Still, some people might say that there’s no one way to summarize her best tips. In my opinion, I think JK Rowling has eight writing rules that stands out.

Eight rules to writing that you, too, can master.

Be ruthless about protecting writing days, i.e., do not cave in to endless requests to have “essential” and “long overdue” meetings on those days. The funny thing is that, although writing has been my actual job for several years now, I still seem to have to fight for time in which to do it.

This is especially hard for those of us with family. Our loved ones come first, and while that is true, our loved ones need to understand that we need time to write.

Setting reasonable boundaries with those loved ones is a crucial step for a writer—even if they’re as simple as, “Mommy needs fifteen minutes of quiet time, okay?”

If you have trouble setting boundaries with loved ones, try setting a reasonable boundary for one week. See how it goes.

If it’s too much time or too little, tweak it. Establish a routine that signals to others that it’s your writing time, but also lets them know that outside of your writing space, you’re there for them.

Not only will this teach the importance of flexibility and discipline to others, but also that your writing is valuable. It’s your work, and your dream! Needing quiet time to write doesn’t mean that you don’t love your family, and communicating this to them might help prevent issues.

Regardless, your writing deserves your time, too. Open communication about this with your friends and family can help everyone understand and respect that.

It’s easy to forget that writing is a job.

We don’t always feel like doing our job. We certainly don’t always feel inspired. To be writers, we must train ourselves to sit down and write even when we don’t feel like it. Those moments are the ones that really matter, even more than the shining, flying, writing moments.

Those moments are what turn amateurs into professionals, and rough drafts into polished manuscripts.

“The muse works for you. You don’t write at her beck and call—you train her to show up when you’re writing.Tweet thisTweet
Rule Three

I stopped pretending to myself that I was anything other than what I was, and began to direct all my energy into finishing the only work that mattered to me.

Yes, writing is possible with another job.

Yes, writing is possible with other responsibilities.

Are you a writer? (I know your inner critic snarled no, but I also know a tiny candle-flicker of unquenchable hope in you whispered yes with so much longing you could cry.)

You ARE a writer. That means you write.

You are a writer. You write. Accept this, fight to believe it, and be amazed at how far that belief can take you.

Write what you know: your own interests, feelings, beliefs, friends, family and even pets will be your raw materials when you start writing.

This doesn’t mean you need to experience aliens in order to write about them. It means that all good stories have universal application. A great example is this Google Doodle. (Trust me. I’m going somewhere with this.)

Take two minutes and thirty-six seconds to watch this.

It’s adorable, right? Without a single word, this video told an effective story. You felt for the little ghost, both when it was sad and when it was happy, right?

That was universal application.

It doesn’t matter what culture you’re from or what language you speak; all human beings know what it is to be lonely, to feel left out, to be frustrated, determined, and to finally be with friends.

That story works because the creators used their interests, feelings, beliefs, friends, family and even pets to tell this story. (I’m fond of the kitty, myself.)

I’m greatly oversimplifying, but here’s the gist: you already know how to tell a moving story because you live one. If you’ve ever had emotions, ever responded to anything, then you already know what universal application looks like.

The practice and discipline of writing just helps you to put it on paper.

I always advise children who ask me for tips on being a writer to read as much as they possibly can. Jane Austen gave a young friend the same advice, so I’m in good company there.

It’s like learning more dance moves or impressively difficult notes on an instrument. The more you learn, the better you’ll be.

So read in your genre. Read outside your genre. Get in the habit of finding time to pick up a book instead of your phone (unless it’s to open up another book.)

You DO have the time to read.

Even if that’s just ten minutes a day.

And the more stories you read, the more likely you’ll start to implicitly develop the skills you need to become a great writer.

Perseverance is absolutely essential, not just to produce all those words, but to survive rejection and criticism.

This is one of those unpleasant truths about publishing: you’re gonna’ get rejected. A lot.

I wish there were a way around this. Harry Potter was turned down again and again because that’s just the way it goes sometimes. And it isn’t only publishers: when you get published, and your work is out there, you’ll get bad reviews, too.

Mostly, they’ll just be people who don’t get what you’re doing. Intellectually, you’ll know that. Your heart, on the other hand, is going to break into a thousand pieces.

But here’s the secret: you can’t stop writing because of push-back.

You MUST NOT stop writing because of push-back.

Keep going. Don’t stop. When you get rejected, pick up your pen and keep going (and use the way you feel to put more universal application into your work).

And when you’re feeling really discouraged? Remember that when someone doesn’t like your book, they might also just not be your ideal reader. Which, as weird as it sounds, you want.

Finding readers who don’t like your book means that you’ve actually probably done a decent job at writing a certain type of book, which increases your changes of finding, connecting with, and changing the lives of your ideal readers.

I have a friend of doesn’t like Harry Potter (Gasp! I know!)

There are literally millions of other readers (me included) who disagree with her story preference.

So keep writing your book, because your ideal readers need it.

This is a deep one. Don’t forget your diving gear.

Writing is a little like a mobius strip, in a way:

There are things you know that you have no idea you know—but your subconscious does, and that stuff will filter into your writing.

As you write, you’ll discover things about yourself. You’ll clarify things, too, because it’s only as you come to write them that you realize they needed clarification in the first place.

Writing is a brave, bold venture, and life-altering discovery is part of the journey. Don’t ever let anyone tell you it’s easy.

Nothing really great ever is.

Failure is inevitable—make it a strength. You have to resign yourself to the fact that you waste a lot of trees before you write anything you really like, and that’s just the way it is. It’s like learning an instrument, you’ve got to be prepared for hitting wrong notes occasionally, or quite a lot. I wrote an awful lot before I wrote anything I was really happy with.

And that is normal. Also, it is okay.

Accept that it will take time, and that sometimes, your pencil won’t be your friend. If you accept it, then when it happens, you won’t throw in the towel and set the house on fire. Instead, you’ll be able to go, “Well, dang; that sucked, didn’t it? Knew it would happen. Time to write some more.”

You can do this, fellow writer. We’re all on that same path, and that means we can encourage each other on the way. Please don’t give up.

And if you feel like giving up, return to JK Rowling’s writing process, which I think are enforced with these eight rules of writing. Look for the one you’re struggling with in that moment that you’re ready to quit. Acknowledge it, then toss it in the trash with your other messy manuscript pages.

That voice trying to get you to stop doesn’t respect your writing.

It’s time to write some more.

Which of these rules from JK Rowling’s writing process speaks to you?  Share in the comments.

Write what you know! Set a timer for fifteen minutes and take a single experience from your life—one that you responded to with emotion—and apply the universal application to your current story. Or, start a new story based on that experience. This may be about loss or love, anger or fear, rejection or acceptance.

Whatever it is, after you write it, post it in the comments, and don’t forget to comment on three other writers’ practice.

The post JK Rowling Writing Process: 8 Rules All Writers Can Learn From appeared first on The Write Practice.