Writing your story’s climax isn’t easy. And even when you outline it properly, including a great villain and a high-stakes task, putting it all into words can be quite a challenge. Perhaps the most challenging part of it, though, isn’t getting the words down. It’s getting the right words down. 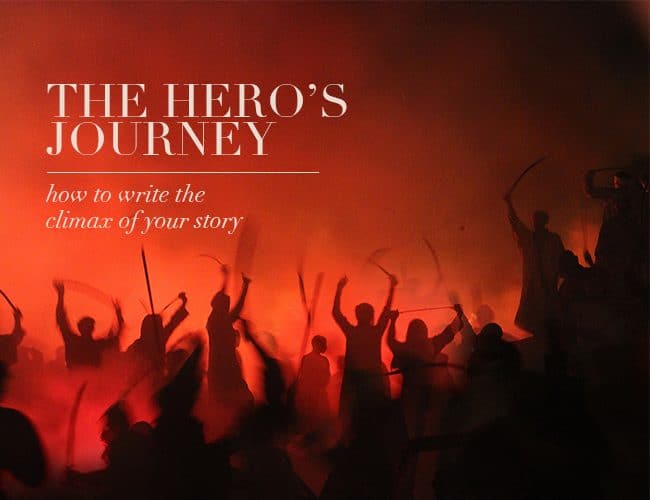 As a judge of several writing contests, I’ve read many stories filled with action, violence, shouting, and sexual friction. And while a few of these stories pulled off their climaxes, most of them bombarded me with noise and gore while abandoning their protagonist’s journey.

When that happens, you can count your reader out.

Here’s how to write your story’s climax and keep your reader excitedly turning pages.

The Hero’s Journey so far

For several weeks, we’ve explored the first seven steps of the Hero’s Journey and talked about how to get each them right as you build to your story’s climax.

Your hero will always begin in some sort of Ordinary World, a place where no one expects much of anyone.
Then he or she experiences a Call to Adventure that he or she is definitely not ready for, at least yet.
The hero will refuse that call somehow . . .
. . . and find him or herself assisted by the wisdom and skill of a Mentor.
After receiving ample training, the hero will cross the boundary between the familiar and the foreign, the Threshold, voyaging into the new world in order to begin his or her quest.
The story then enters the sixth phase, the world of Trials, Allies, and Enemies. where the hero will make friends, confront enemies, overcome tests and traps, defeat monsters, and prepare for the big challenge to come, known as the Ordeal. That’s where your climax will take place.
And, of course, before the big climax, there is a moment of Approach, where the hero makes final preparations and often experiences a humble fall, where his pride takes over or her friends abandon her (for a while).

Thus begins Step #8: The Ordeal. The hero must “storm the castle,” so to speak, facing a task that is greater than anything he or she has encountered so far, possibly tangling with the villainous Shadow character along the way. The goal of this Ordeal is to obtain the Goal of the quest — usually rescuing someone, acquiring a treasure or weapon, or fulfilling some other task (like destroying the One Ring of Sauron, à la The Lord of the Rings).

3 Principles to Write the Perfect Ordeal

The Ordeal is a lengthy scene, filled with many beats. And each beat must be carefully designed to maximize its impact. This is the moment your reader has been waiting for, after all.

How do you write it so it is irresistibly good?

1. Focus on what got you here: Desire

It’s easy to screw this up. When we plan and write a story, we spend a lot of time building up toward the exciting climactic event. And when we get there, it’s easy to overdo it with physical details as we attempt to take the movie playing in our heads and put it down on paper.

Unfortunately, the same movie will never play in your reader’s mind. There might not be a movie playing at all.

Instead, when readers confront pages of physical description and noise (whether they’re depictions of fistfights, gun battles, sexual intimacy, or shouted opinions), they instinctively recoil. This is especially true if the bombast isn’t earned, but thrust too quickly or emphatically into the story.

This is natural. We avoid conflict, especially conflict that we can’t comprehend or establish ourselves in, even as observers. It is imperative that your reader understands every piece of your story’s action, and that he or she cares about the outcome of each punch, jump, kiss, or insult.

That’s why you need to focus on what got you here: Your protagonist’s desire.

And along with that desire (for his/her want and need), is his/her fear. What does he have to lose? Why is success so important to her?

Each moment of action must be filtered through the protagonist’s journey of hope and fear. Each step forward or retreat backward must come with hope, disappointment, terror, anticipation, belief, despair . . . all the emotions that accompany an active protagonist.

2. Use beats of quiet contemplation or conversation

Another mistake authors make with their story climaxes is to load them with nonstop action.

Again, this may be a result of “writing the movie in your head,” as we hope to create a scene of pulse-pounding excitement, and write one blindingly exhausting scene after another.

But this isn’t how the human mind processes things. It also doesn’t allow much room for your hero to process how the stakes (and his/her dreams) are changing in the moment. Human beings are constantly evaluating and strategizing, and you need little moments of quiet thought or peaceful conversation to punctuate the sound and the fury of your story climax.

More movies do this than you might immediately realize. Rewatch your favorite action movie and you’ll notice throughout the climactic action scenes just how often the story pauses for characters to think, reflect, and reorient themselves.

Star Wars: A New Hope does this brilliantly during the attack on the Death Star sequence. The action constantly cuts back to Leia on Yavin 4 as they watch the Death Star close distance to eradicate them. The action frequently focuses on Luke’s face as his fellow rebels are shot out of the sky, including his best friend from home, Biggs.

And perhaps most memorable of all, as Luke flies down the famous trench with Darth Vader on his tail, the action pauses as Obi-Wan Kenobi’s ghost says, “Use the Force, Luke!” and the music swells into beautiful strings, evoking a reality more peaceful and wonderful than the one we are immediately faced with.

The scene works for many reasons, and one of them is that it pauses to let the characters — and the audience — take a breath in the midst of the chaos.

3. Don’t give the hero what he/she wants

One final trick that will make your climax unbelievably thrilling is to withhold the very thing the scene promises to deliver: The Goal.

This isn’t just meant to mess with your reader. It’s to reflect a painful reality of life: That what we want is often deeply unsatisfying, or at least not so easily won.

There are two ways to do this.

First, you can simply have the Goal be taken away. Destroy the MacGuffin. Kill off the character. Have the Shadow, or villain, hide the Goal or protect it in a more ultimate way.

Or secondly, and perhaps more meaningfully, let the hero obtain the Goal, only to feel a deep and hollow disappointment. So often we orient our lives toward some physical goal, like money, fame, sex, or treasure, only to obtain that goal and find ourselves feeling emptier than ever before. We realize that no matter how much we believe we will be fulfilled by this “thing,” that no thing can ever fulfill as deeply as we’d hope.

“Want to create a gripping climax? Give your hero a win-but-lose ending: there’s some success, but there’s also failure—or even the success itself isn’t as satisfying as expected.Tweet thisTweet

Internal needs take the form of validation, acceptance, peace with oneself, spiritual harmony, reconciliation, forgiveness, acceptance of death, emotional/spiritual rebirth, and more. These needs are what will ultimately drive your Hero’s Journey forward, because heroic journeys aren’t just about getting prizes like weapons, money, or “peace.”

They’re about peace within, and the peace all human beings long for in a world filled with so much injustice and suffering.

When you use your climax to reflect this reality, your story will ripple with unfathomable power. Readers will gasp, but they won’t give up. They’ll have to keep reading, because what happens to the hero will say something about the readers’ lives as well.

That’s the kind of story we all want to write.

Ordeal/Climax: Action of the Heart

No matter what kind of climactic Ordeal your story requires, never forget that the most important action must occur in your protagonist’s heart.

It can be so easy to compose physical imagery and believe it will thrill our readers. But without the necessary action of the heart — the action of wanting, hoping, fearing, disbelieving, and more — the physical action will fall painfully flat, leaving your reader disappointed.

What are your favorite climax scenes from stories you enjoy? What do you love about those scenes? Let us know in the comments.

If you’ve followed along with the previous posts in this series, your story is advancing quickly to the Ordeal. Today, take a stab at this critical scene.

For fifteen minutes, practice writing both physical action and heart action. To do this, narrate something physical that your hero might do, or the Shadow might do to the hero.

Then jump into the hero’s psyche and react with thought or dialogue. Write how the hero processes this emotion physically: Does he sweat? Do his fingers become ice-cold? Does his vision blur?

Experiment with this physical-emotional back-and-forth to discover new ways of composing climactic action! Post your writing in the comments, and be sure to leave a constructive critique on another writer’s exercise!

The post The Hero’s Journey: How to Write the Climax of Your Story appeared first on The Write Practice.