The time has come to pen the ending of your Hero’s Journey. 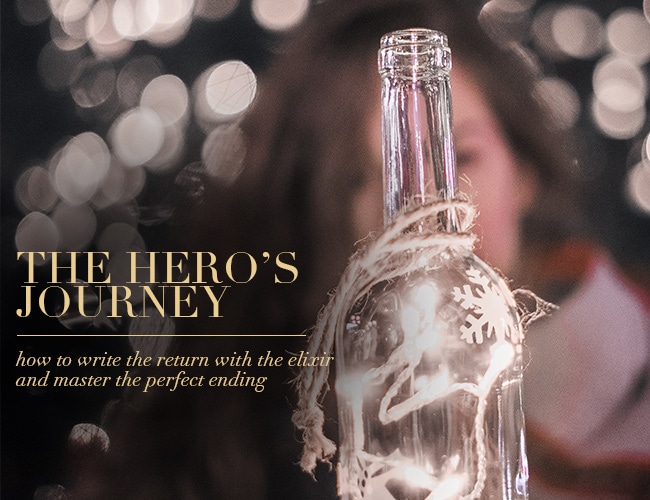 For some writers, this is a painful truth of storytelling. Finding the right ending — or rather, any suitable ending — can feel impossible.

Thankfully, the Hero’s Journey, as researched by Joseph Campbell, provides a clear roadmap for concluding your epic journey, saving you much of the headache that often comes with crafting the perfect denouement.

Here’s how to do it.

Step 12: Return With the Elixir

The Return With the Elixir is the final stage of the Hero’s Journey. The hero returns to their community as a force of change, bringing healing and wholeness to society at large. That healing (the “elixir”) can be physical, spiritual, or both.

Everything Before the End

What makes the Hero’s Journey so useful is its familiar and easily implemented structure. And while you’ve probably seen and read a thousand stories that use it, you may not be totally familiar with each step. Here’s how a heroic journey reaches its conclusion:

Your hero will always begin in some sort of Ordinary World, a place where no one expects much of anyone.
Then they experience a Call to Adventure that they are definitely not ready for, at least not yet.
The hero will refuse that call somehow . . .
. . . and find themselves assisted by the wisdom and skill of a Mentor.
After receiving ample training, the hero will cross the boundary between the familiar and the foreign, the Threshold, voyaging into the new world in order to begin their quest.
The story then enters the sixth phase, the world of Trials, Allies, and Enemies, where the hero will make friends, confront enemies, overcome tests and traps, defeat monsters, and prepare for the big challenge to come, known as the Ordeal. That’s where your climax will take place.
And, of course, before the big climax, there is a moment of Approach, where the hero makes final preparations and often experiences a humble fall, where their pride takes over or their friends abandon them (for a while).
Then they confront the big task, known as the Ordeal, and makes a decision that wins them the prize.
After succeeding at this task, they are usually Rewarded, but not in a long-lasting or ultimate way.
This leads to a “fake-out” ending, in which the hero thinks they are done, or is chased by the Shadow or Devil Figure back home. The Road Back is what this step is commonly called.
The hero must confront the story’s ultimate evil and face death in a deep and meaningful way. Then, through their strength, cleverness, loyalty, honesty, courage, or virtue, they survive, experiencing a paradigm-shifting Resurrection.

Now it’s time to end your story well. And while it may be tempting to end with Resurrection, this won’t be enough for your reader to enjoy a full and complete sense of catharsis. There needs to be a little something more.

As I wrote about in my article on the Resurrection, your protagonist’s action must resurrect more than just their own flesh and blood. These choices must do even more than to resurrect the protagonist’s hopes and dreams.

For your protagonist’s choices to be heroic, they must bring life and hope back into the community at large. Otherwise they are merely protagonistic, serving the needs and wants of a single character, not society as a whole.

This is what separates heroes from everyone else. A hero’s deeds have a multiplying effect. They expand beyond their own existence into the surrounding world, bringing hope, life, and purpose where it had once been lost.

This phenomenon is what Joseph Cambell referred to as “the Elixir.” Normally a type of medicine or potion, an archetypal “Elixir” can be anything that brings healing, whether physical or symbolic, to the hero’s community.

The Elixir can be physical, like food (THe Hunger Games), rain to restore dead crops (Ong Bak: The Thai Warrior), or a physical reunion, as in Toy Story.

It can be emotional or spiritual, like hope (Star Wars: A New Hope), faith (Exodus), or even a renewed sense of marriage and family (Back to the Future).

These stories often have a lasting impact on a reader or viewer because there is a sense that wrong has been made right.

But these stories are also very difficult to write without dozens of drafts. One doesn’t happen upon a story that depicts moral rectification easily. Often we set out to write stories with such a powerful theme, only to create preachy diatribes that are as subtle as a sledgehammer.

“One doesn’t happen upon a story that shows how to heal the world easily. It takes several drafts to master a brilliant ending with a powerful message.Tweet thisTweet

So how do we finish well after so much storytelling?

The seeds of a perfect ending must be planted at the very beginning of your story.

And the most important seed to plant is brokenness or injustice.

Heroes exist to make right what is wrong. And what is wrong in your world must be some form of brokenness or injustice that your hero seeks to correct.

This can take a lot of forms, and below I’ll provide a list of these forms with film and novel examples.

Some are moral, with a clear good vs. evil dichotomy:

Empire vs. Rebels (Star Wars)
Anyone vs. Nazis (Indiana Jones)

Others are emotions and spiritual:

Many genre stories that follow the Hero’s Journey have a clear physical stake, and this is what is broken:

The whole reason your world needs a hero is because of this brokenness. And many stories, including the examples above, contain more than one instance of brokenness in their worlds.

When Many Things Are Broken

For example, The Terminator is obviously a science fiction/horror story where the injustice is very physical: life or death for Sarah Connor.

However, what becomes clear as the story develops is that more than her life is at stake. Her innocence is shattered by the relentless, ruthless pursuit of the Terminator, and this devastation culminates with the death of her protector and true love, Kyle Reese.

In the end, Sarah’s physical safety has been preserved, but her innocence can never be regained. Yet hope remains in the form of her pregnant belly. An innocent life grows there, needing protection and love.

And yet the audience knows that the baby, John, will be quick to lose his own innocence when the threat of the machines comes again.

These large themes may seem obvious in hindsight. But in the writing, they are very difficult to keep track of and maintain. We tend to lose ourselves in the weighty tasks of world-building, characterization, catchy dialogue, and fun action scenes.

By the time we get to the end of our story, we’re trying to land this enormous plane called “My Novel” and we just want to try to tie up every loose plot strand. Remembering to satisfy deep concepts of justice seems like another thing on the “to-do” list.

But it’s so imperative that our hero right the wrongs of the world we’ve built. And to do that, you have to build your story around a fundamental injustice that the hero is deadset on correcting.

Make Things Right . . . for Everyone Else

The Hero’s Journey is a personal journey. In it, the hero undergoes unimaginable trials and challenges that stretch them to the limits.

Yet in the end, the Hero’s Journey must be a broad and transformative journey for the world at large. It must have a resounding impact on the lives of the “little guys” in your story world. That’s why the best stories have one or two scenes in the resolution that focus on one thing: Making Things Right.

Think about the events you tend to see in these scenes:

An orphan meets two welcoming parents
A seed of a new tree is planted
An elder passes the torch to a member of the younger generation
A lost loved one leaves a “goodbye” message
Someone apologizes and takes responsibility for their mistakes
An old building is closed or demolished, making room for a new one to be built or opened

I could go on, but you can probably see one or two of these scenes in your head. They all involve Making Things Right. And they tend to do it on two levels:

In an ideal “Return with the Elixir” step of the Hero’s Journey, you will write two important scenes.

The first is a Personal scene of Making Things Right. In this scene, a major character experiences a correction in their own personal world. The deeds of the hero allow them to experience the blessings of justice and peace.

Then, there is a Social scene of Making Things Right. In this scene, the hero’s deeds bring blessings back to the community at large. This can be the hero’s home village, his country, or even an entire planet or galaxy. Whoever is oppressed by the Brokenness or Injustice usually experiences the blessings of Right when the hero has finished their redemptive work.

Keep in mind that the hero may not always survive to this point. In some Heroic Journeys, the hero doesn’t actually physically survive the Resurrection step, instead dying a physical death in order to preserve their philosophy, transferring hope to the next generation.

Even in this case, the final step of the Hero’s Journey can proceed with the Personal and Social scenes of redemption. You’ll need to appoint the hero’s partner, or Loyal Retainer, to do the narrative load-lifting in these scenes.

The most important takeaway for this step of the Hero’s Journey, and possibly all twelve of the steps, is that heroes exist to right the wrongs of the world.

“Your Hero’s Journey hero exists to right the wrongs of the world.Tweet thisTweet

That means starting your story with injustice. As long as all of your writing labors are centered on a hero righting a systemic wrong that affects a large number of people, you’re going to be heading in the right direction.

Then consider: Has this problem existed in the past? Could it exist in the future?

And could it exist in a completely different world or universe?

This will get your imagination soaring! Because every genre story ever written has a secret trick up its sleeve: It takes the injustices of our normal, everyday world, and transports them to distant and fantastic times and places. It’s that simple.

So ask these questions and start writing around brokenness. Then your heroic journey will be well on its way!

If you’ve been following this series, by now you’ve written, or at least planned, your Hero’s Journey from Ordinary World to Resurrection. Now, plan out how to tie it all together in the ending as your hero returns with the Elixir that will heal their world.

In order to find the perfect Elixir, think through these questions: What is wrong with this world? What specific wrongs need to be righted by the hero?

Consider two kinds of injustices to build around in your story:

Write for fifteen minutes about the world your hero needs to save, exploring these two forms of injustice. Share your plan in the comments below. Then leave some feedback on another writer’s comment!

The post The Hero’s Journey: How to Write the Return With the Elixir and Master the Perfect Ending appeared first on The Write Practice.